For BOM Away Monday, I am showcasing Block 6 of Hampton Ridge.   This one was much easier to make than any of the other blocks.  But I’m not as thrilled with this one as I usually am.  I guess this one is not a favorite of mine.  But out of 44 blocks, it’s okay to have some that are not a favorite.

Check out more finished BOMs at

For Design Wall Monday, I’ve removed Missing Ivy since that has again been pushed to the bottom of my WIP list and placed all the completed Hampton Ridge blocks together.  I do like to see it come together.  Check out more design walls at Patchwork Times.

We received the third step of Bonnie Hunter’s Celtic Solstice Mystery on Friday and I did as much as I could during the weekend.  Somewhere in Bonnie’s instructions she says to do as much as you can for each step but to move on when she provides the next step.  So that is what I have been doing.  Last week I was only able to cut for Step 2.  During the week, I only accomplished a bit of the piecing.  I finished 8 chevrons by the end of the week.  Rather than chain piece and have nothing finished, I started by doing a few from start to finish.  At first, I was very frustrated.  The first one I did, I pressed towards the green.  The points didn’t match.  Then the next few I pressed one side towards the green and the other side away from the green.  The points still didn’t match.  I couldn’t understand why the pressing instructions weren’t included.  I’ve noticed that pressing instructions aren’t always given in patterns and it irritates me so.  I was taught to press to the dark so if there aren’t instructions that is what I do.  But when my points do not match it’s usually because I pressed in the wrong direction.  Anyway I was getting frustrated that my points weren’t matching so I re-read the instructions again and found the pressing instructions.  ha-Reader Error!  Once I followed the instructions, my points were matching.  Not always but much better.  Once I knew how to do the finished piece, I started chain sewing the green/white pairs.  Soon, it was Friday, the 13th… and all I accomplished were 8 finished chevrons about 150 green/white pairs and that was it. 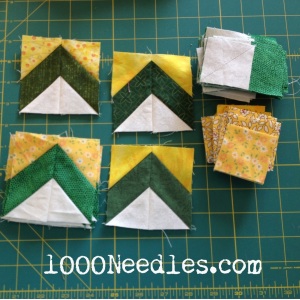 For Step 3, I cut a few of the orange and yellow strips…. 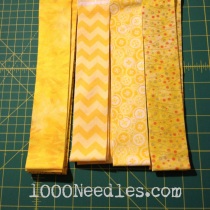 I used the Easy Angle ruler that I purchased for Easy Street last year to cut the Triangles, per Bonnie’s instructions.  I really liked having to use a ruler I had on hand.  I have a bunch of specialty rulers and I find that they usually just take up space.  And, I didn’t know I could use this ruler this way.  I really liked making Half Square Triangles (HSTs) like this.  It is much easier than pinning 2 squares, drawing a line, sewing on both sides of the line and then cutting.  That’s what I did for Missing Ivy and now that I know this way, I’m going to use this way from now on. 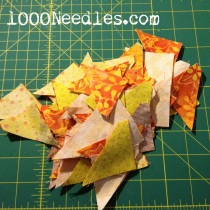 This time I read carefully and I didn’t see pressing instructions.  She gave instructions when we got to the pinwheel but not at these stages.  So I had to do a few to figure out the best pressing directions.  At first I pressed to the Orange for each step.  And it was fine when I joined two HSTs together.  But when I joined the two pairs together to make the pinwheel, the points would not match.  It’s a trick with the sewing machine and how the pieces are placed together.  If you’ve been quilting for awhile, you probably know what I’m talking about.  If not, I’ll try to take pictures of what I’m talking about while I work on more pieces this week.  Suffice it to say that for the HST, press to the Yellow.  For the 2 Pairs, press to the Orange.  And for the Pinwheels, press to the Orange.  They butt up nicely together and the points match up easier than pressing in the other directions.

And even though I didn’t get everything we need to have for this step, I got a lot done considering how much time I was actually able to be in my sewing area.

To see more progress on clue #3 of Bonnie Hunter’s mystery quilt, check out her blog at Quiltville.

~Wish I was quilting.