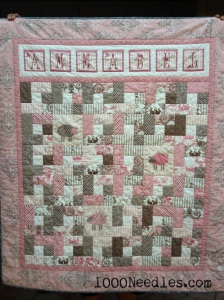 I originally purchased the pattern, two charm packs, and the background fabric in Spring 2012 originally intended to be a baby shower gift. At the time, I do not think we knew it would be a girl but I was already putting out the idea in the universe. I could always go back and buy boy fabric if I had to. Well it was a girl and she turned 1 on 11/2/2013. I didn’t get this quilt in time for her arrival. With everything going on in 2012 and 2013, I just didn’t have the energy to get it together. But in August, 2013 I figured I could whip it up. I needed some fabric and jelly rolls and other stuff so I went online and purchased everything I needed. By the September Guild retreat, I had everything and started cutting into fabric. It was the perfect place to get started since I wouldn’t be in my house where all the nosy eyes would see what I was doing. Everything came together so quickly. It’s my first time working with pre-cuts and I get why people love them. The cutting time is cut in half and the quilt top gets done so quickly. If I didn’t have some applique to do on the quilt I probably would have gotten it done that weekend. But I had 3 little lambs to applique and it took me about a week or 2 to get those done. It probably took 3 weeks to get the center top done.

Then I added the borders and worked on the backing. I made the backing much more complicated than I needed to. I really didn’t want to have extra fabric lying around and I didn’t want to buy yardage just for a back. So I pieced all the remaining charms from the charm packs and any strips left from the jelly rolls together to make a coordinating back. The back has the blues and greens that came in the charm pack but wasn’t used in the top. That is what really took forever because I kept having to stop and measure and sew more pieces onto the back to make it big enough. I’m not sure I’ll ever do this again because by this time, I just wanted it done.

The back of Ammabel’s quilt

This is the quilt I spray basted for the first time and it was super easy. I did have some trouble lining things up on the floor but that was my fault because I didn’t tape the backing down like I was supposed to. I quilted it on my domestic sewing machine – my little Bernina – in straight lines on the ditch. It was all very easy now that I’ve had experience doing it. I also geared up for this by watching the various Free Motion Quilting classes on Craftsy as well as taking Sue Nichols Free Motion Class at PIQF. Then I needed to bind it. I didn’t have enough fabric left over to bind and I trekked it over to the LQS (Eddie’s in Sunnyvale) to find something. I had it in my head to get some pink fabric for the binding to go with the rest of the quilt but I wasn’t liking any of the pink fabric. I wanted something similar to the pink already on the quilt but just a shade darker to set it off. I couldn’t find it so I went with Robert Kaufman’s Marbled Gray. It isn’t the exact gray I wanted but because it’s only the binding – it actually worked perfectly.

Close up of the binding

Finally got around to placing my vinyl sticker on my sew ez table. It’s lovely….
New addition to our plant family. #thaichili #gardening #foodforest
First time @voolenvine has had Wolke in a long while and I miss the update. #soverysad