The last two weeks have been a rollercoaster.  With the girl going away for the first time, the elections, and then the hubby and I going on our first couple vacay with no kids, I didn’t find the energy to do any blogging.

First, the girl had fun.  A ton of fun.  It made the expense, the fears, and just general upheaval in our day to day lives worth it.  She visited a number of colleges over the week located in the NorthEast United States.  The elections came and as a parent, I worried about her not being with me during the post-election shock.  It didn’t help that she texted me from NYC to say she was in an anti-Trump rally or to tell me how she was crying and upset about the results.  But had I been where she was at her age, I would have done the same thing.  So I put my fears aside and hopefully she had no idea.  By the end of the trip, she loved Boston University and Emerson College.  There were others but those were her top two.  I am thrilled, scared, and hopeful that everything comes out all right in her journey.

Second, the elections.  As a woman of color, I’m sad, angry, and fearful of the results.  I know racism exists in this country.  I experience it regularly.  But I’m hurt and shocked to realize that it is still loud and big enough to elect someone who spouts racist and sexist comments as Trump has.  I really thought that we were growing as a country.  I really thought we were becoming a better people and a better society.  I know there were bad apples.  There are always bad apples.  But apparently, they are enough to get Trump voted in.  I lived through the George W. Bush presidency and the fear and war and division he spread during his 8 years as president and the resulting economic downturn.  I am hopeful that President-Elect Trump doesn’t do what he said during his campaigning and does what most politicians end up doing after becoming elected (nothing, flip flops, learns to work with others).  I hope that although the Republican party dominates the house and senate, they don’t bend over backward and let Trump do whatever he wants just because he’s a so-called Republican now.  I am really afraid that they do.  I don’t usually write about politics on this blog but it’s the main reason why I haven’t blogged these past couple of weeks.  I know there a lot of people who will disagree with me and I’ll probably lose some readers.  But this is who I am and I will not apologize for it or pretend that what is going on in the US is not happening.

And on to better topics, third, our first couple vacay without the kiddos!  The Wednesday after the election, the hubby and I boarded a plane to Colorado and spent about a week in a cocoon in Breckenridge with another couple.  We’d never been to Breckenridge (or Breck as the locals call it) or even to Colorado.  Actually, I was in Colorado for a business trip but I didn’t see anything but the ride to the hotel for a conference and then the ride back to the hotel so I don’t count that. ;0  The snow hadn’t hit yet so there was very little snow and we had to go even further up the mountain to see it.  It was a wonderful visit.  I enjoyed it a lot and would love to go back with the kids to play in the snow or even during the summer for river rafting and other outdoor activities. 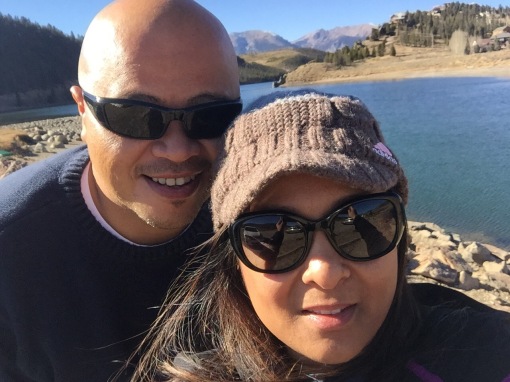 I plan to get back to my regular posting now that I’ve got a weekend at home.  I’m looking forward to the upcoming Thanksgiving week since we’ll have time off.  My son is off the entire week and I’m really excited about that.  My daughter is still in school until Tuesday so we’re planning on heading to Northern CA to be with family Wednesday morning.

Another diagonal complete!
one of the best thing about retreats is the enabling… my new makers train case arrived today. I’ve been looking at this since Stitches SoCal 2019 and seeing Stephanie Horsley’s made me want to finally grab one. It arrived today and I’m so thrilled. 🤣
Finished with April’s clue…. slowly but surely.