Getting it done – one piece at a time…

I cannot believe that the last time I posted a WIP Wednesday was 9/25.  Whew!  I didn’t realize how much time has gone by.  Well I have all these list of things that need to get done and I’ve prioritized my projects and I have calmed myself into a semblance of organization.  And while I’ve followed some of my self-imposed rules I have been very BAD!!!!  Okay – let me explain.  I have a particular project that I’m working on.  I’m almost done with the back, then I baste and then I quilt and then I bind!  You know the drill!  I know that I will not be able to really work on it until NEXT weekend – that’s 10/26.  So while I could work a little bit on it here and there between now and then – I just don’t have the time on the weekdays or the space to lay everything out.  So on the weekdays my daily tasks are those things I can do that do not require time and space – mainly I do a bit of hand quilting in front of the TV and a bit of hand applique at my sewing table.  By a bit – I mean 1 string.  That’s it.  That’s all I require of myself every day.  If I feel like doing more – well then I’ve got my October goals that I need to work on.  But I didn’t want to do any of my goals the last few days.  Other than getting most of the backing done for special project I haven’t done anything else on my get it done list.  Last Friday the first BOM came for Hampton Ridge.  And while I wanted to dive into it as soon as it came I held myself back.  I didn’t have time to enjoy it so I put it aside to play with later.  Then Sunday evening came.  I spent most of Sunday working on that special secret project and by the evening I was tired of it.  I didn’t want to work on Easy Street because that involves more piecing the backing.  Really boring stuff that I was just done with.  So I pulled out Block 1 Sunday evening and started on it.   I finished it Monday night. 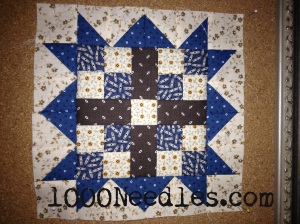 It’s 8″ unfinished.  I have three more to go this month.  It was difficult working with the smaller pieces.  But I want to pay attention to my points and get them matching as much as possible.  I learned how to do a new way to do half square triangles and I’m not sure if I love it or not.  The instructions called them “Star Single” Half square triangle papers.  After stitching continuously through 8 lines on paper and fabric and then cutting at strategic places, I end up with 4 -1&1/4 inch half square triangles.  Then I put them together.  In the end it looks like two flying geese side by side and I wonder why the instructions just didn’t have us do those pieces that way.  Who knows but I’m always interested in learning new ways to do things in case I find I like the new way better.  I followed the instructions and I had to pay really close attention to the seems and points matching.  Quite a few didn’t match but I was able to finagle it with the ironing so that it was close.  There was only one pair that I had to rip apart and redo because that one was way off.  It worked better when I ignored the pressing instructions and pressed in whatever way gave me the best chance to get the points to match.  It might have been easier to just do two flying geese (geeses?).  I would still need to match the points but maybe not as many points.   I’m not sure I love it or even enjoyed the process but I learned something new and that gives me a good feeling.  AND…it’s a finished block, one block closer to a finished quilt. 🙂

Then last night, I worked on the Jan.2013 Block for Lucky Stars.  I didn’t finish it.  I knew I didn’t have time.  But I have the upper left corner of it done. 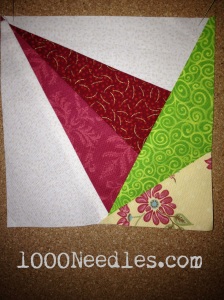 And I love it.  I almost started with the 6.5″ version and stopped myself.  As I recall when I did the previous block I started with the smaller version thinking it would be easier but found it more difficult.  So this version is the upper left portion of the 12.5″ block.  I think it’s coming out great so far.  And all the fabric came from my scrap box!  Even better because that box is getting kind of full.  I realized that this is one reason I should not cut down all my scraps to smaller sizes like I’ve read/heard scrappy quilters do.  So that’s another thing to think about.

Well I’m very proud of myself, even though these two things were not on my to do list these last few days I like what I’ve done and that, my friends, is the most important thing!

1. Raining Cats and Dogs – Block 6 – I started on this on Sunday.  This isn’t on my to do list for October.  My to do list was to finish Block 9 which was done last weekend.  However I want this quilt done sooner rather than later.  So I got the background pieced together and I started appliqueing the first piece last night.  It’s really big so I only got half of it done.

2. my hand quilt – Working on quilting Border #3 – I plan on doing 3-4 rows of quilting all around Border #3.  I’m almost done with the first row on all four sides.

Tonight I’m going to the PreShow at PIQF in Santa Clara, CA.  I’m so excited.  I’ll take pictures where I can.  They’re usually pretty strict about not taking pictures and posting them online so I doubt I’ll be able to post much.  However, I will post (with permission, of course) when I can. So starting tonight until Sunday, I’m at PIQF and I will not be working on any of my quilts.  I’ll be in workshops learning new methods.

If you haven’t already read it or need a reminder, this post lists the workshops I’ll be at.  And if you are there, comment below or send me an email.  I will get notified on my phone.  It would be great to meet an online friend in person. 🙂

What is on your WIP Wednesday?

~Wish I was quilting…

This is not a race. Enjoying the process…
#month ... #monthlymarker #monthlymarker2021 #December2021
I can’t stop! I love the glitter and the silks.