I’ve been watching a lot of YouTube videos lately.  Isn’t it weird how they still call them podcasts even though podcasts used to mean just audio recordings?  And some of them still call themselves VLOGs but those really mean the vlog style of simply recording short snippets.  And for those who cross stitch, they have FlossTube.  It’s still a video podcast on YouTube  but is specific to videos about cross stitching.  It’s so very interesting how words and meanings are created and changed as technology progresses.  Anyway, in my little world, there’s a shift as more and more bloggers switch to YouTube.  But then there are still a lot of bloggers keeping up that world.  I haven’t opened up a YouTube channel yet and as tech savvy as I am, getting dressed and prettied up is just way too much work for me to sit in front of my phone and chat with the world.  I would really love to though.

I mention the whole YouTube thing because somewhere in all my watchings, I discovered that I’m a multicraftual.  Meaning… I do a bunch of different crafts.  In the past, I used to think I only have room for 1 hobby or 1 main thing. I can have little side things but really 1 main thing is it.  I only have room for so much stuff and there is only time for so many things.  But lately, that kind of thinking has gone the way of the dinosaurs.  I am doing 3 things right now – cross stitching, knitting, and quilting.  I know I haven’t posted much of anything on that front but believe me – I still call myself a quilter and I still think of myself as primarily that.  At some point in the near future I want to start sewing garments and stuff.

Don’t get me wrong, space is still an issue.  I only have so much room for yarn, floss, and fabric.  Of everything fabric and quilty things have taken over most of my craft space.  Knitting takes up very little space in comparison and cross stitching even less.  At least for me.  My yarn stash is just in one bookcase and I’m on a yarn diet for right now.  I went a little overboard on the yarn purchases last year and now I’m working my way through it.  Cross stitching takes up 2 drawers and I’m slowly putting kits together.  Before this recent cross stitch frenzy that has taken over me lately, I had a small box of stuff that fit in a little drawer.  I’ve probably tripled my stuff since then but that means 2 drawers full of stuff.

Time is still an issue too.  There’s only so much time in a day, week, month, year.  I primarily knit while I’m out of the house and cross stitch on one project during the week and a second project on the weekends.  Quilting is more difficult.  I’ve been stuck on this project:

Do you see that… I finished the top in February 2017.  It took me the next YEAR to finish the back: 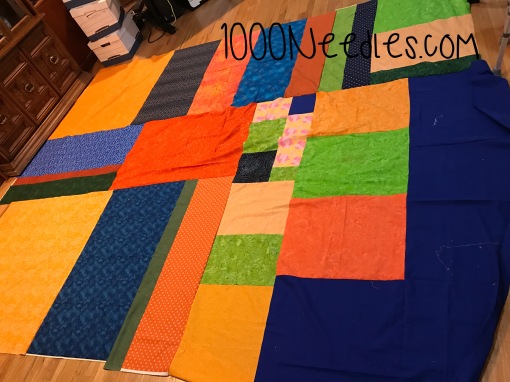 And in the meantime, the place I used to rent a long arm at (Barron’s) got rid of their long arm and I no longer have a place to quilt it.  This is a king size quilt.  I ended up just biting the bullet and wrestling it under my machine. Yes, my domestic sewing machine!

I do have a Bernina 790 and that machine has a great big throat so that helps.  But, it’s still crazy and I hate it.  It’s been sitting there for the past few weeks. I’m about half way through the quilting but I am not feeling like doing this right now.  In fact, I probably will not get back to it until the last weekend in September.  Next week I’m going on a quilt retreat!

So I haven’t been doing much quilting this past couple of years because this humongous quilt was occupying way too much space in my brain.  What can you say, it’s a king size quilt.  I don’t even have a king size bed.  You may wonder why I just didn’t get it quilted?  I could have paid a long armer to quilt it for me and be done with it.  And if it was for me, I probably would have.  But this was a mystery quilt. It was Bonnie Hunter’s annual mystery quilt from a few years ago and I’m not especially in love with it.  Well I love the pattern but I’m not in love with the colors.  They are not my favorites.  That’s reason number one has to why I didn’t want to pay a lot of $$ for it to be quilted.  Then reason #2 – I’m giving it away.  I do not know yet who it will be going to but, someone will be getting it at some point.  So at this point, I just want this quilt to be done, given away, and out of my house forever.  Then I can move on to something else.  And with Barron’s no longer having a long arm for me to rent, I’ll need to figure something else out on that end.  I will probably by myself something in a couple of years.  The Bernina long arm is too much money.  But I may get a sit down machine.  It will not take up as much space as a long arm and will allow me to get these quilts quilted.  So over the next two years, I’ve decided to just get the tops and back ready and build up a pile of quilts to be quilted.  These are my thoughts and things can change over time but, this is what I’m thinking of doing.

I would like to post more often but I find that I get hung up on the picture part of the blog.  I do not have problems taking pictures, but putting my watermark and uploading a pic to wordpress seems to be a major hang up for me.  I do have more things to say but I’ve got to go give our dog a bath, so I will need to come back and tell you more of what’s going on.

I miss blogging and writing.