I finally finished this quilt.

As a reminder, I didn’t make the top. I bought it at a guild treasure hunt many years ago. Someone gave the top away. I thought it was a great way to practice my FMQ. I do not make a lot of quilts each year because life is busy and I enjoy the process. This particular year I was very much into FMQ and I was intent on practicing my FMQ. Practicing on a quilt top I purchased seemed like a great idea. I think I bought it for $5. I can’t remember. But I thought it was cute and now I have a quilt ready to gift if I need a gift. Well, many years later and it was still sitting in my bag of quilt tops.

This was the year that I put it in my queue to quilt. It was quilted with my Bernina Q20 (sit down long arm).

I pieced the back and I used fabric from my stash. The only thing I couldn’t find in my stash was a good binding fabric. I decided I wanted an orange to match the darkest orange in the top and I didn’t have anything in my stash. So at the last anniversary sale from my LQS (the one just a few weeks ago), I purchased this fabric.

I’m really happy with it.

And now it is finished. And I took a picture and posted it so it’s not just finished, it’s finished Finished FINISHED!

Happy celebratory dance all the way around.

I tried hard to get this done in time for Sunday Stash but I didn’t so it will be in next week’s post.

Here’s my plan for this week in a simple list. 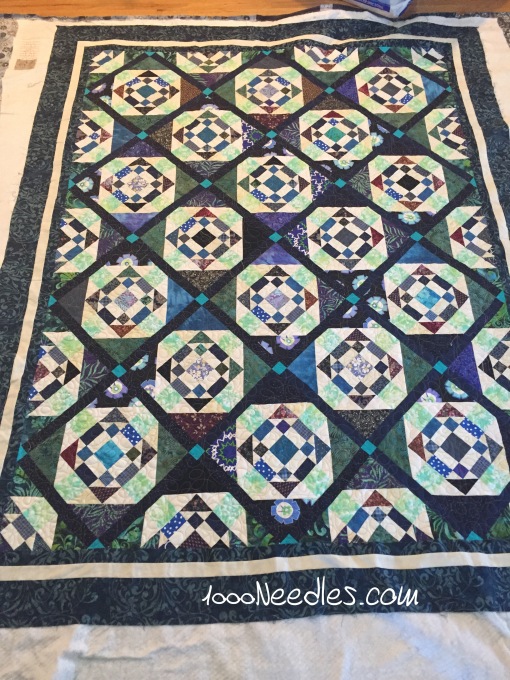 Wow the month is over!  It went by so fast and even though I didn’t sew that much for a couple of weeks I was able to work on my priority projects.

My top three BOMs are almost done.  Tell It To The Stars are all put together… I think November’s clue is just going to be the border.  For Moon Glow, I’m all caught up and I’m just waiting for the next kit to come in the mail.  It should come any day and I keep checking my mail to see if today’s the day.  I’m really excited about Hampton Ridge because all of the blocks are done!  Woohoo!  It’s up on my design wall right now and I love looking at it throughout the day.

I was able to get a lot of the cutting done for Scrapitude 2015.  I’m finished with all the dark fabric and I’m halfway through the background fabric.  My goal is to get these cut before Grand Illusions start at the end of the month. 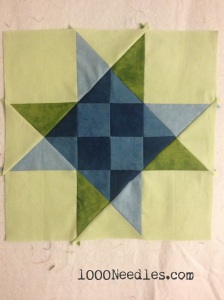 I finished quilting Easy Street!  Now all I need to do is get the binding and label on.  I have to go through my bins because I can’t remember if I bought binding and put it away or if that was something I was going to do later.  If I don’t like anything in my stash then I’ll have to go to the quilt shop this weekend to for something. And who doesn’t want to do that?

Other than that I’ve got May’s block for Tell It To The Stars I need to put together.  I also received the next kits for Hampton Ridge and Moon Glow.  My goal for this weekend is to just get the block for Tell It To the Stars done.  I really do not have time to do more than that.  If I find I do have time, I’ll try to get started on Moon Glow.  I like to stay on top of the BOMs I’m current on and right now I’ve got 2 kits waiting for me on Hampton Ridge.  That will have to wait for a weekend with MORE quilty time.  Maybe I’ll find that on Mother’s Day weekend.

Non Quilty plans for this weekend: The kids piano lessons got rescheduled for this morning, then I’ve got a yoga class.  After that I’m free so I may hit the quilt shop at that time until Game 7 of the Clipper/Warrior series this evening.  Tomorrow we’ll be heading over to Berkeley to check out UCB for the kids.  Its early for them since the kids are 12 and 9 but they’ve gone a bunch of times to UCLA, my alma mater.  I guess I should be fair and show them UCB is a good school too. 🙂 lol   All kidding aside, they haven’t been and while we’re in NorCal we’re playing tourists.

My sewing machine is waiting for me and if I want to get anything done to report on Monday, I better go join it. 🙂

This Saturday finds me with only 4 more blocks to go on quilting Easy Street AND borders.  I only have 4 days left and with my arm, wrist, and elbow giving me issues I’m not able to quilt that long.  Doing 1 block a day is about all that I’m capable of.  That means I only have enough time left in April to do the 4 blocks.  I do NOT have time to finish quilting the borders. Of course, I’ve only got the 4 side blocks to do which is much easier on me than the middle blocks so maybe I’ll be able to do more than 1 block a day.  We’ll see.  If I don’t get the borders quilted, I’m okay with that.  I made significant progress quilting Easy Street this month and I’m well on my way to getting it on my finished list for May.

I was able to get the backing pieced together for the Flowers and Baskets Quilt that has been on the UFO list since 2012.  So that’s a DONE on one of the items on my to do list for April.  I’m hoping to get it basted in May and is next in line to quilt once Easy Street is done.

The next item on April’s Quilty Goals is to get caught up with my BOMs: Moon Glow and Hampton Ridge

With that said, I’m not sure what I’ll be concentrating on this weekend.  Since both Moon Glow and Hampton Ridge BOMs are arriving next week, part of me wants to tackle those so that I’m not 2 steps behind for May.  Since I spent all of last weekend working on them, the other part of me wants to put those away and work on something else.  The other items on my April Quilty Goals list consist of:

None of these items excite me.  So, I may do something else entirely.  But then that’s too much effort for me right now (which is really why I have such a lengthy to do list :)).

Well, my sewing machine is waiting for me and if I want to get anything done to report on Monday, I better go join it. 🙂